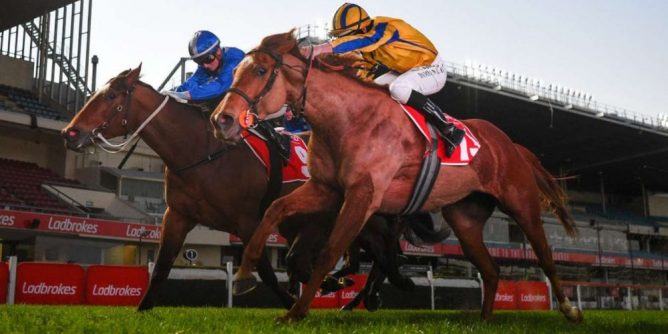 Racing at The Valley tonight headlined by the group 3 Typhoon Tracy for the fillies.

Trent Crebbin has previewed every race and his best bet comes up in Race 4.

The track is rated a good 4 and the rail is out 5 metres which could see an on speed advantage.

3000m race to kick us off and not much interest. (7) Jekyll’n’hyde won a 3000m race last start at Sandown despite starting $20. His form prior was average so it’ll be interesting to see if he can back it up.

(8) Mr Blackwood has the most upside only having had 4 starts. He started $3.60 in the same race and obviously has plenty of scope to improve.

(2) Wellsford is consistent and generally competitive in these races.

(3) Wilbury is a half brother to Home Affairs who (probably) won’t reach his sibling’s level but shouldn’t be a maiden for long. He had no luck in a forgetful debut down the straight and has been tipped out, trialling well.

(6) You Ess Ess Are is an interesting runner and definitely the omen runner given the current Russia/Ukraine situation. That being said, I think he’s a big chance here. He started favourite on debut on Cranbourne cup day and the track was about a heavy 14 and he didn’t handle it. He’s jumped out well leading into this and is very quick early. With Froggy on from barrier 2, she should launch to the front and over the 955m will take some running down.

1 unit WIN You Ess Ess Are

(4) Along The River was desperately unlucky at Sandown last start, put in a pocket early in the straight and only getting clear with 150m to go. He rocketed past Island Edition into 2nd and probably wins with clear air. He draws the widest but should just be able to blend into the race down the chute and run well.

(5) Island Edition was a bit keen in that race first up and ran okay. He has talent and the 2nd to Marine One is obviously very good form.

(1) Mynumerouno is progressive and can win first up, but nothing would really shock here.

0.5 units WIN Along The River

(1) Midwest looks the winner. He’s flying this horse and looks very well placed again in bm70 grade coming off 4 straight wins this prep. Very fast early, he’ll jump and either lead or sit outside the leader with ease and I just can’t see anything matching him in a weaker race than last time. Black odds are good odds.

(2) Young Liam won first up and typically goes well at this T/D. He’s quick early and might provided some resistance to the lead for Midwest, but I don’t think he’s at the same level.

(6) Home Rule has upside and has led over 1000m before. He’s probably best kept to the shorter trips after being extended to 1300m last prep, and he can stalk Midwest if that horse has any chinks.

(2) Agenlli was given a great ride last start at this T/D to tag Laundy and Nash got everything out of him late. I thought he was suspect at the trip and I still do as Laundy went far too slowly to make it a test. If something does run along, he still needs to prove it.

(5) Flossing can roll forward and was good winning 2nd up. He’ll improve again here out in trip with Froggy hopefully rolling along near the lead. He ran well in some 3yo staying races last prep, only narrowly denied by Red Santa one day at Caulfield.

(6) Laybuy next best, another that can contest for the front and should improve 3rd up.

Not much between most of these mares. (11) It’s True brings the different form which could well be better. She stuck on gamely for a very narrow 2nd over the mile last start, going 8.5L above average early and just run down late by Honeycreeper. This is her first go past a mile but I expect she’ll handle it being by So You Think out of a Starcraft mare. She’ll need a bit of luck early but expect her to run well down in the weights.

(1) Angel Rock bolted in an easier race at this T/D last start. She’s got a big weight but draws nicely.

(2) Nerve Not Verve was very disappointing last start at this T/D when leading. Her runs prior were good and her best form would see her highly competitive.

Does look a race in two for the fillies’ feature of the night. (7) Snapped is a progressive filly on the up and she ran some strong splits at this T/D despite pulling herself up out wide mid race. Her time was 1-2L slower than Mars Mission on the same night and that horse is hard to beat on Saturday. This is harder but I think she’ll roll forward as she did on debut.

(2) Scorched Earth is obviously very hard to beat coming off a $3SP and narrow 2nd to Argentia. All her form this prep has been very good and she gets winkers on first time. She also has the opportunity to roll forward from out wide but she might have to go back, and if she does I think Snapped can get away with this.

(12) Sandy Prince is the best horse in this race with the most upside. He had a good last prep, matching it with some of the better 3yo’s including Forgot You and Extreme Flight. 1200m will be as short as he wants it but he’s jumped out nicely in fast time behind Finance Tycoon and he gets in with the bottom weight.

(4) Mariamia is flying and running 3rd to Probabeel last time out is obviously very strong. She did get an easy lead there but will have to work here with Snapper and Music Addition drawn just inside her.

(6) Snapper has the talent and goes well at The Valley but has been struggling a bit for form. He wasn’t bad last time at Pakenham and might be turning the corner.

(2) Sacred Palace is a handy horse and the In The Boat form is strong but he’ll need some luck and a good ride from the apprentice.