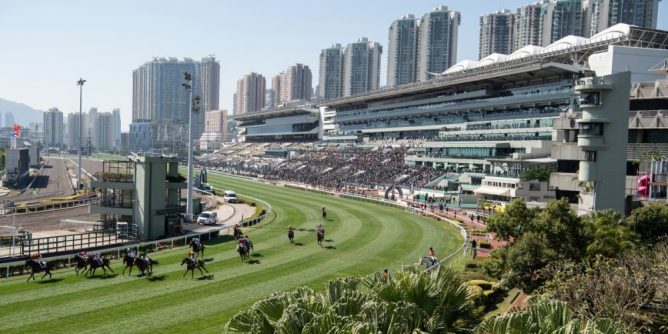 It’s a huge day of racing in Hong Kong, with three Group 1s on the 11-race card at Sha Tin!

The Chairman’s Sprint Prize is the first of the majors, followed by the FWD Champions Mile and finally, the FWD QEII Cup.

Tim Geers has previewed all the features, as well as other selections he’s keen on throughout the day!

Find his Sha Tin preview and tips below.

(4) Erimo looks the best of the day here. The John- Size-trained four-year-old has had two career starts and been terrific in both. He was beaten a nose on debut before sitting three-wide the trip last start and going down 0.5L. He draws sticky again today out in barrier 12 but with a touch more luck than he got last start, he’ll be awfully hard to beat.

Tipping (1) Beauty Joy to bounce back today. He’s got six wins from 10 career starts but was turned over as the short-priced favourite last start. Zac Purton said the other day that he’d missed some work leading into that race, but he looks back on track with two trial victories leading into today. Has to lump top weight here but gets a soft draw and at his best I think he’ll win.

The first Group 1 of the day is The Chairman’s Sprint Prize.

We might see (6) Sight Success able to turn the tables on (2) Wellington here. There was 0.3L in Wellington’s favour when they met in The Sprint Cup three weeks ago, but Purton goes on Sight Success today and gets an ideal draw in barrier 2, whereas Wellington will be forced to go all the way back from barrier 9.

There isn’t much between the Hong Kong sprinters and quite often it comes down to who gets the best run.

I wouldn’t discount the chances of (3) Lucky Patch at double figure odds. He started $3.20 favourite for the Hong Kong Sprint in December when involved in the awful four-horse fall. He hasn’t started since, but he’s undefeated first up from a spell and now he’s $13 against a similar field?

The Group 1 FWD Champions Mile looms as a fascinating race.

(1) Golden Sixty bounced back to his brilliant best last start, ridden with more intent out of the gates rather than being happy to give them all a head start. From the low draw again today we can expect a similar ride to put him into the race early. He should have these covered, but there is one runner he’s yet to face before that adds interest to this race.

That runner is the four-year-old (8) California Spangle, who comes out of the four-year-old series. He ran an enormous race in defeat in the HK Derby. He had to work across to find the lead early from the wide gate, he copped pressure mid-race, had to come off the rail in the straight in search of better ground, wandered around like he was lost, and still had the audacity to go toe-to-toe with Romantic Warrior who had the cold sit on him. The four-year-old classic series form sometimes doesn’t hold up in open company, but this is a smart horse and it will be interesting to see how Zac rides him against Golden Sixty.

Another fascinating contest here in the FWD QEII Cup.

(1) Russian Emperor was the dominant winner of the Citi Hong Kong Gold Cup two starts ago, but it poured rain leading into that race and he relished the conditions. He’s undefeated on wet ground, with just the one win from 16 starts on good ground. That’s a big query.

He faces the Hong Kong Derby winner (8) Romantic Warrior today, who has suffered just the one career defeat. He draws ideally in barrier 4 here. The four-year-old classic series form sometimes doesn’t hold up against the open class horses, but I really don’t think there’s a great deal for him to beat in this race.

(5) Panfield is a knockout chance at huge odds here. He did win first up last preparation in a Group race. His recent form doesn’t read great but he comes into this fresh and we know he likes this distance. $71 is over the odds.